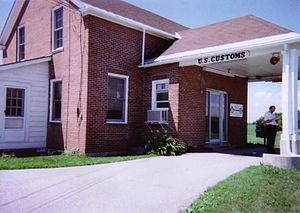 Did You Know... How the Border Crossing at Morses Line, Vt., Got Its Name?

What's in a name? What intriguing trail of history, place and people went into the making of a place called Morses Line?

The Act of Feb. 18, 1791, declared Vermont was to be admitted to the Union as the fourteenth state on March 4, 1791. Two days before it was to be admitted, Congress passed the Act of March 2, 1791, providing for the establishment of the Vermont customs collection district, which was to have a sole customs port of entry and delivery; the collector of customs was to reside in Allburgh (today's Alburgh.) Federalist Stephen Keyes was appointed by President George Washington as the first collector at Allburgh, and he served until January 1797.

Referring to the northern and southern U.S. land borders as "the line" has long been common practice. Mounted customs inspectors "rode the line" as early as the 1850's. In Vermont, the international border is a somewhat erratic line that at times is almost a mile above where it was supposed to be, i.e., 45 degrees north latitude. Evidently the two surveyors charged in 1771 with setting the line from Lake Champlain to the Connecticut River had difficulty navigating the rugged territory which resulted in serious errors. The wandering line above the 45th parallel was finally permanently established when the U.S. and Great Britain signed the Webster-Ashburton Treaty in 1842.

With so much uncertainty as to the location of the border, farms and public streets frequently bisected the line, and many buildings and residences actually straddled the line. During Prohibition, line houses were a popular means of enabling Vermonters and bootleggers to drink and smuggle without having to go through customs and immigration inspection. Other line houses were post offices or general stores that served Americans and Canadians, who entered the buildings via separate doors on either side of the boundary markers - thus avoiding the customs and immigration inspection and control.

A port of delivery in Franklin

Originally chartered as Huntsburgh in 1789, the village name was changed to Franklin in 1817. Archibald W. Hyde, the eighth and tenth collector of customs for the port of entry in Burlington (served 1829-1841 and 1843-1845) recorded in a letter dated Jan. 1, 1833, that customs duties were being collected in Franklin. The 1834 official Register of all Officers and Agents, Civil, Military, and Naval, in the Service of the United States lists Jerome J. Beardsley as Deputy Collector and Inspector of Customs in Franklin, having an annual compensation of $300.

With the port of delivery in Franklin being several miles south of the international line, those crossing for business, trade or personal reasons were required to travel to or from Franklin to report to the U.S. Customs officer. This was the usual situation at most of the ports of entry along the Vermont border prior to the 1930's which led to avoidance to report by those with destinations north of the custom houses, establishment of unofficial crossing points, illegal distribution of alcoholic beverages during Prohibition, and smuggling. Franklin County was a center for dairy farming, along with maple syrup production. Milk, butter and cheese were premier products shipped as far away as Boston. Because of the difficulty of transporting these perishables, the local producers found it easier, quicker and more profitable to trade with nearby Montreal.

J. Morse's line store when under the later proprietorship of J.M. Hill, Jr. The store, which gave the hamlet the name Morses Line, straddled the international boundary at Morses Line Road. This postcard photo is from A History of Franklin, 1789-1989.

In the town of Franklin, the customhouse was located in various places along Main Street. It appears the appointed Deputy Collector and Inspectors lived in Franklin during the period of their appointment. Two wonderful postcard images, both postmarked 1909, show the customhouse when it was located in the former shoe repair shop on Main Street-complete with the Customs ensign flying and Inspector Adolphus Dewing Whitney standing beside the town's grain scale.

The hamlet of Morses Line

The first line store burned down and J. Morse quickly replaced it. James "Jimmy" Monroe Hill, Jr., whose mother was a Morse, often visited with Morse family relatives such as the two Fuller brothers who owned the farms abutting the border on either side of Morses Line Road, and ended up taking Mary Fuller as his bride. Hill then purchased J. Morse's line store, built a farmhouse on the U.S. side of the line for his bride, and a large stable/barn on the Quebec side for his driving and racehorses.

Jimmy Hill stocked his store with everything the surrounding farmers and their families might need. But then, catastrophe struck a second time, burning down the Morses Line store. Proprietor Hill immediately rebuilt bigger and better. At one point, the Morses Line post office was located in the store, as well as the Franklin telegraph office. Canadians and Vermonters journeyed to the line store from miles around, entering the store through separate doors on either side of the boundary marker, shopping freely throughout the store, and departing laden down with purchases without going through customs and immigration inspections.

The tiny hamlet grew on both sides of the line to include several farmhouses, a blacksmith, a wheelwright, an apiary, and during Prohibition: the Bucket-of-Blood bar, which also straddled the line.

Carroll Belanger noted in 1999 that he was born in 1926 in Morses Line and spent the first three years of his life there. His parents lived in a house owned by Jimmy Hill, which was located directly across Morses Line Road from J.H. Hill's store, and straddled the line just as the store did. Belanger's father worked for Jimmy Hill as one of his trotting horse drivers. He goes on to relate the house was moved to the Quebec side of the border.

In 1913, the U.S. Customs Service was reorganized; ports of entry were established, closed and realigned. Franklin ceased to be a port of delivery and Morses Line was now designated as the port of entry in the customs collection district of Western Vermont, with the headquarters port of entry being in Burlington. However, the customhouse continued to be located in Franklin until 1935. During Prohibition there was an increase in the number of inspectors and mounted inspectors assigned to the port, which caused overcrowding in the tiny customhouse. Port operations were moved out of the customhouse beside the brook and into the lower level of the Haston Library on the corner of Main Street and Highgate Road. The customhouse would later be located in a residence at the northern end of Franklin's Main Street.

1940's photograph of the U.S. Customs and U.S. Immigration border inspection station at Morses Line, Vt. The border station was built in 1935 on the west side of Morses Line Road (State Route 235), and contained a small office on the first floor plus residential quarters for the Customs and Immigration officers stationed at the port.

During the 1930's, there was a concerted effort by the Treasury Department to construct new border inspection stations at or near the international boundary line. It would not be until 1935 that funds became available and the federal government purchased less than an acre of land on the west side of Morses Line Road in order to construct a border inspection station. The site was not located adjacent to the boundary line because the Morses Line general store and houses that constituted the hamlet of Morses Line were still standing.

Louis A. Simon, Supervising Architect of the Treasury, was responsible for the design of all the new federal border stations constructed in the 1930's. Reflecting the location and prevalent architectural style, those stations designed for Vermont were of brick or frame construction in the Colonial Revival Style popular at the time.

The Morses Line building was the smallest in size of all the stations constructed during this period, and the only style that incorporated family living quarters for the customs and immigration officers assigned to the port with a tiny 150 square foot joint-use office. The sturdy brick station with a slate roof, plus a freestanding wood frame/siding garage, were constructed in 1935 for the princely sum of $11,410.

By 1922, Jimmy Hill decided he'd had enough of running the Morses Line store and sold it to Charles Bibeau, who managed it for twelve years. Dissatisfied with Bibeau's management, Hill bought the store back in 1934 and managed it until his death in January 1935. The executor for Hill's estate sold the store and the Hill's farm house to Lucien Brouillette.

In 1952, the Canadian government decided to relocate their Morses Line border station closer to the border, purchased the store and Jimmy Hill's farm house complex, and demolished all the buildings. The line-straddling, Hill-owned house across the road from the store was moved into the Quebec side of the line.

Today, only one farmhouse complex survives on the east side of Morses Line Road slightly north of the border station. The Rainville family dairy farm spans the west side of Morses Line Road straight up to the border; their historic barn and farmhouse stand adjacent to and south of the small brick border inspection station. These three structures have been declared eligible for inclusion in the National Register of Historic Places - silent representatives of the once bustling community of Morses Line.